Applications to Seedcamp Week just closed – What did we see?

48 days later and applications for Seedcamp Week 2009 are closed. We believe the startups submitted represent a cross section of what is emerging from EMEA. So what have we found?

Quantity is the most obvious measure, but one we don’t like to shout about as it doesn’t mean much on its own, plus we don’t like to boast. That said we are happy to announce that application numbers are similar to last year’s – downturn, what downturn? Considering TechCrunch’s graph of doom (see below), which shows a fall in startups founded, bottoming out around the new year – we think this is remarkably good news. Additionally, applicants came from over 40 countries highlighting that entrepreneurs are very active all across Europe and that teams want to startup here.

The graph of applications over time resembles the famous hockey stick curve – almost half of the submissions were received on the last day! Last Sunday must have been a busy day for startups over Europe… 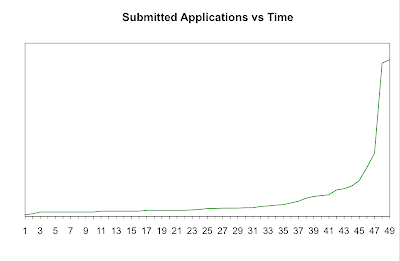 There are many other trends we want to extract from the application data, such as; where are the teams from? what tools are they using? and what are their business models? When compared to previous years applications this could cast an interesting light on the state of and trends in European technology startups. Seedcamp’s current Fellow, Mirwais, is working on some of these questions so we hope to regale you with the answers soon.

Finally, this is a really exciting time for us. Seedcamp has now backed 14 companies, and over the past year we have got to know some cool nascent founders from all over Europe. Hence we are excited to be starting the processes which select the next batch of teams we will be working with at Seedcamp Week and beyond.