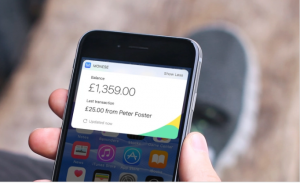 We are incredibly proud to announce multi-award winning 100% mobile banking service, Monese, who we first backed at seed stage in spring 2015, has gone on to close an impressive $10M Series A from a suite of world-wide investors in a bid to expand its offering into mainland Europe and become the service of choice for expats, migrants and those seeking an alternative to traditional banks.

We have followed on in this heavily oversubscribed round and are delighted to invest alongside other high calibre backers including Fin Tech investors, Anthemis, and Korea Investment Partners.

Monese’s recent Series A round brings the total amount of funding raised by the company to an impressive $15.8 million.

Norris Koppel, CEO of Monese, commented: “We are incredibly excited to close a heavily oversubscribed funding round with a suite of top investors at our side.

“The money raised will be key in helping us launch Euro current accounts to become available to customers in other European markets, as well as a host of new features like direct debit and credit services to ensure customers have everything they need to stay in complete control of their finances,” he added.

Once installed, Monese enables non-natives to open a bank account in the UK, simply by taking a selfie and a picture of their local passport or national identity. The Monese current account can be used to receive a salary, shop, make bank transfers and send money abroad, and also provides users with a contactless card which can be used like a regular debit card.

Monese has signed up over 40,000 customers from over 179 different countries who have collectively made over 1.8 million transactions, moving over £150 million, since September 2015. Towards the end of 2016 over 90% of Monese customer acquisition was organic, driven by word of mouth referrals from existing customers.

Since its launch in September 2015 Monese has maintained a steadfast focus on operating as its customers main banking account, shipping a full suite of features to their current account product throughout 2016, gaining them international recognition as the leader in ‘instant banking’ services across Europe, as well as multiple awards including Best Challenger Bank at The European Fintech Awards, the Horizon 2020 Award for Research and Innovation and Best Consumer Payments Programme at the Emerging Payments Awards 2016.