On November 8-10, we had the pleasure of holding the 4th Seedhack – our biggest and most successful Seedhack ever. This year’s theme was ‘remixing content’ and attracted 100 hackers to join us for a weekend full of pizza, Redbull and hacking. Some of the brightest talents of the startup community from 17 countries showed up to take on the Seedhack 4.0 challenge, culminating in 16 hacks presented at the final demo day.

Using APIs provided by our partners for the event; BBC News Labs, EyeEm, Imagga, Facebook, Getty Images, Google, HarperCollins, Nokia, Thomson Reuters and Stupeflix – hackers were challenged to produce innovative products, all to be presented on stage only 60 hours later.

Located at Google Campus, the event kicked off Friday evening with inspiring talks by a number of corporates and startups. Gareth Capon, Product Development Manager at BSkyB, Ramzi Rizk, Co-Founder of EyeEm, Vinay Solanki, Strategy & Business Development Director, EMEA of Getty Images and Matt Shearer Innovation Manager at BBC News Labs shared their views on the challenging opportunities in the world of content. In another format, Nick Perrett, Group Director, Strategy and Digital from HarperCollins brought two authors (James Smythes and John Rogers) on stage with him and showed innovative ways of remixing their content. API presentations by the partners rounded off the formal presentations for the evening.

Over stacks of pizza, beer and Mari wine (good stuff), hackers mingled and exchanged ideas. After the Dominos-sponsored pizza fest, hackers pitched their ideas and quickly formed teams. And then, the real work could begin!

After a long night of hacking, teams kicked off day two bright and early with a gourmet breakfast – fuel for the long day of hacking ahead. In the afternoon, we invited mentors from Google, Twitter, Facebook, BSkyB, and others, as well as business angels to join and help the teams with their ideas. Throughout the day our various API partners were also present to support the hackers with API integrations.

Teams worked day and night to finalize their projects. Highlights of Saturday were a lottery, beer pong and the magic hands of Simon the Shiatsu Massager, who took care of the hackers. After a Bitcoin mining mafia attack, an electricity blackout and loud german techno music, the teams worked all night to finish their hacks in time.

On Sunday, teams presented their hacks to a crowd of over 100 people, a high calibre jury, and 160 viewers on the Seedhack livestream! The results were impressive. Fueled by endless cups of coffee, a fridge full of Redbull, and tasty catering throughout the entire weekend, the hackers turned 60 hours into 16 impressive new startups. The winners received Star Trek Enterprise Pizza cutter, a Playstation 4 sponsored by Getty Images and phones sponsored by Nokia UK. HACK YEAH!

Here you’ll find the winners and awesome projects that came out of the weekend:

Find out more about their hack here.

Literatrip – Connecting people and places to their books

Watch their video here and get the app in the store here.

Facebook Hack (most useful app for after a hackathon): Afterhours

All teams that presented on Sunday (in the order they presented):

2. Afterhours – shows you where the next bar is that is still open

3. Literatip – connecting people and places to their books

4. Moodmusic – play music to your mood

5. Sokrates – memory game for kids with audio and visuals

9. Picit – easily attach pictures out of the web to your mail in a browser

14. Triber – visualizes and quantifies relationships between people and their follower using Twitter API

Check out some photos: 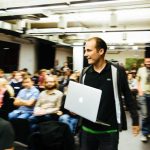